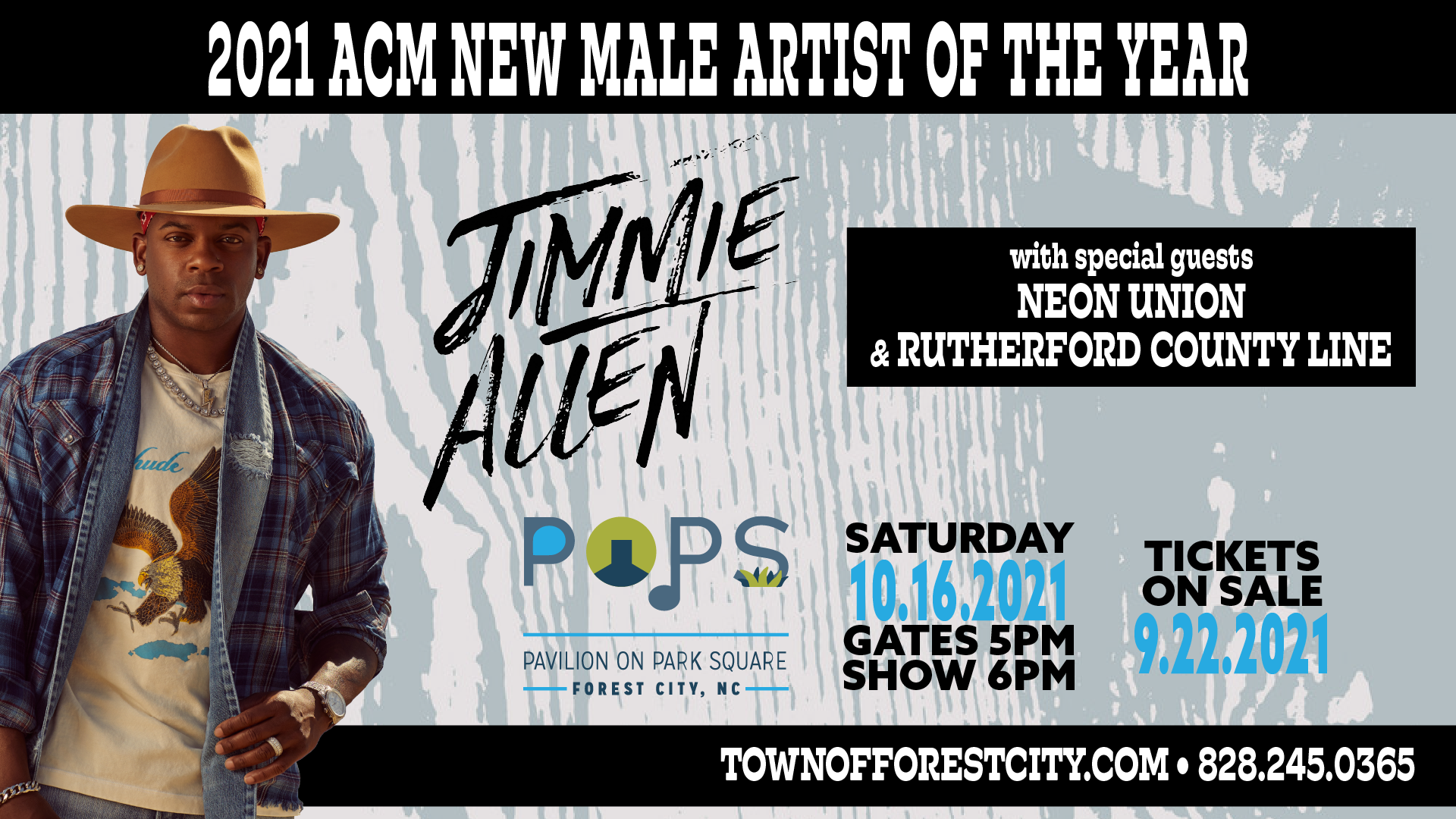 Tickets are available at eventbrite.com and in-person at The Twisted Pear (184 E. Main Street, Forest City, NC) beginning at 12PM on Wednesday, September 22. For more information about the concert, please visit townofforestcity.com/news. For more information on Allen, visit jimmieallenmusic.com or follow him on Facebook, Twitter and Instagram.

As we prepare to host this concert, we ask all attendees to follow the NC COVID-19 safety protocols for the safety of all visitors and staff. These protocols include being considerate of others and providing ample amounts of space, practicing good hand, cough and sneeze hygiene, using the sanitizing and handwashing stations that are located throughout the park and staying home if you feel unwell. We also strongly encourage you to wear a mask in areas that may have a high concentration of people, regardless of your vaccination status. Please join us in committing to follow our guidelines to help us accomplish our goal of hosting a safe and successful event for everyone involved.
For updates and information, please visit townofforestcity.com. If you have specific questions, please contact 828.245.0365 or courtneyashley@townofforestcity.com. We’re looking forward to seeing you at POPS!

A new addition to our tickets this year are Pit Passes! Pit Passes can be purchased as an add-on with any ticket for $5 each. Pit Passes give you access to the Pit Pass Area directly in front of the stage. This area is standing room only, and it will serve as a constantly flowing area so everyone who purchases a pass can equally enjoy the up-close and personal experience. 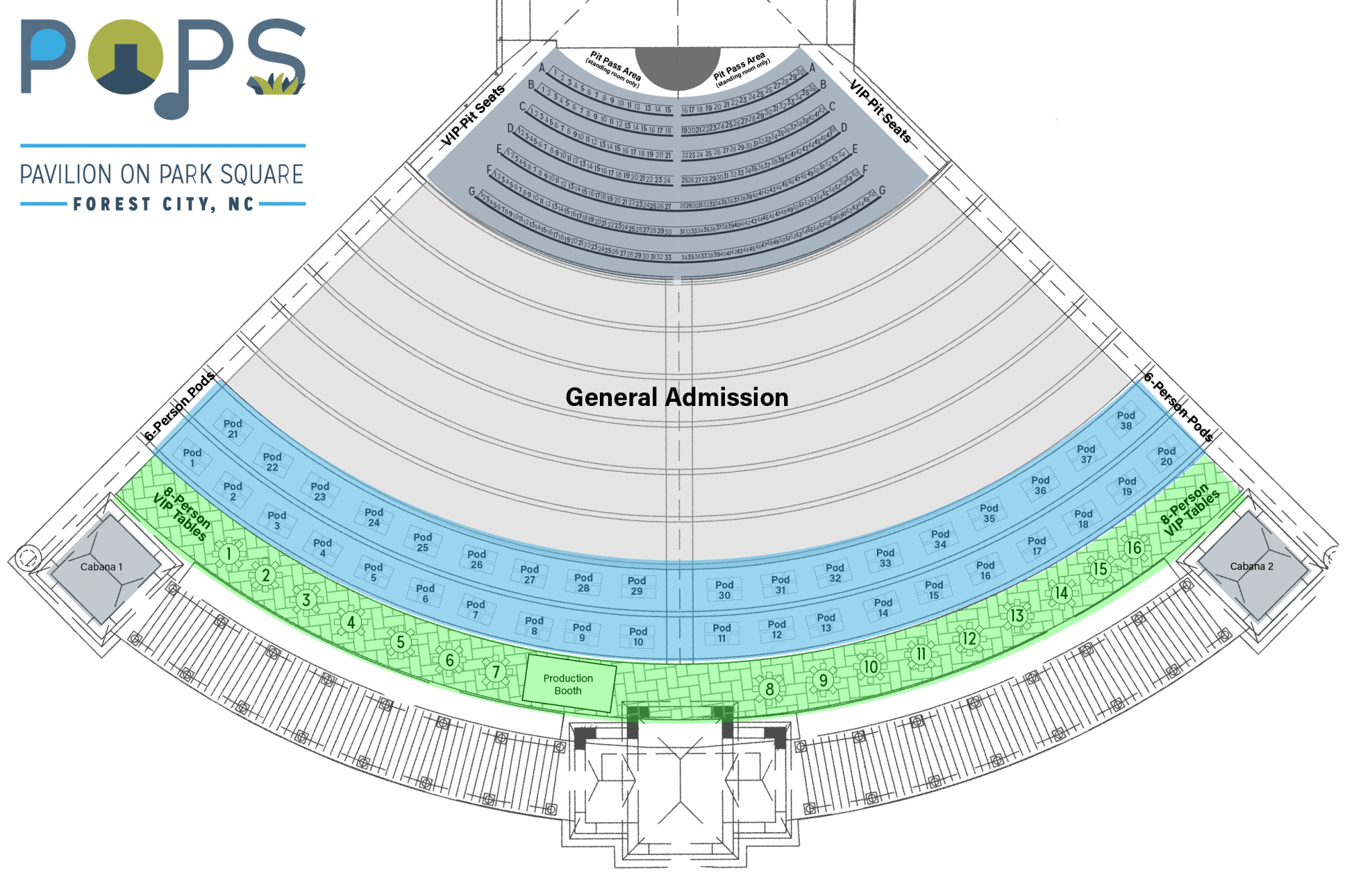 KNOW BEFORE YOU GO

Any more questions? Send an email to courtneyashley@townofforestcity.com or give us a call at 828.245.0365. We can't wait to see you at POPS!

THANK YOU TO OUR INCREDIBLE SPONSORS!

For Allen, musical dreams and a love of true-to-themselves artists like Alan Jackson, Aaron Tippin, Montgomery Gentry and Jason Aldean brought him all the way to Nashville and beyond–from traveling around the world to places like Japan, Germany and the UK; to performing a tribute at the Kennedy Center Honors for Garth Brooks, the national anthem at the Indy 500, returning to American Idol as a mentor after being cut from the same competition a decade ago and other once-in-a-lifetime moments.

But it was actually a nightmare which turned this promising singer into the artist he is today. After a series of bad breaks Allen was forced to live in his car, too proud to ask for a bail out. For months, he worked multiple jobs and finally saved enough for an apartment, but then hit another snag – country music wasn’t ready for him. “People were just trying to help,” he says now. “But they wanted me to change my sound and told me I had to lose my boots. The turning point came when I stopped listening and finally let my music be a natural reflection of who I am.”

Since then, Allen has been following his own compass, and it’s leading somewhere special. In 2017, he caught his big break and signed a record deal with BBR Music Group/Stoney Creek Records and a team that embraced his individuality. “I don’t regret the hard times,” he explains about his trials. “I think each thing you do adds a layer, whether it’s a layer of toughness, perseverance, motivation or just a layer of wisdom. At the end of the day, you come back to what you know and what’s embedded in you.”

What’s embedded in Allen is a powerful, soulful sense of groove – “If my body don’t move in the first four seconds, it ain’t for me,” he says – a love of deep messages and a knack for razor-sharp hooks. Those driving forces formed the bedrock of Mercury Lane – a cutting-edge mix of country, rock, R&B and pop, produced by Ash Bowers and Eric Torres, that received critical acclaim, with Rolling Stone raving that it “challenges the narrowly defined model of what constitutes a next big thing in country music” and The New York Times hailing it one of 2018’s strongest, calling it a “conventional country album, filled with songs about the small details.”

With Mercury Lane, Allen made history as the first Black artist to launch a career with two consecutive No. 1 hits on country radio, with “Best Shot” claiming the No. 1 spot for three weeks and his second single “Make Me Want To” hitting the top spot in March 2020. Allen’s hard-earned dreams are finally becoming reality, but he shows no signs of limiting himself.

He followed up the success of Mercury Lane with his July 2020 collaboration project, Bettie James, that has amassed 171+ million streams and has further established Allen as Country’s next superstar. The star-studded seven-track project combined his deep love of family and genre-spanning taste in music. Named in honor of Allen’s late grandmother, Bettie Snead, who passed away in 2014 and his late father, James Allen, who passed away in 2019, Allen hand-selected artists that touched the lives of himself, his grandmother and his father in some way, allowing their legacies to weave seamlessly throughout Bettie James. The wide array of hitmakers include Brad Paisley, Charley Pride, Darius Rucker, Mickey Guyton, Nelly, Noah Cyrus, The Oak Ridge Boys, Rita Wilson, Tauren Wells and Tim McGraw.

“My dad and grandmom were two completely different people, but both played a huge part in my life,” Allen says of the motivation for the project. “Since they died, I have been wanting to leave trails of their legacies throughout my music.” The result is a musical composition of love, heartbreak, perseverance, hope and faith. Jimmie’s current single “Freedom Was A Highway” pairs Allen with his friend and Country music superstar Paisley for a breezy, windows down track that joins Allen’s distinctively breezy grooves with a Paisley signature guitar solo.

Bettie James received a slew of critical acclaim for not only the music, but the historic nature of various collaborations and the project’s subsequent place in country music history. NPR calls the project an “announcement of [Allen’s] arrival” and a “huge step for country” while Billboard hails it “a powerful statement from a developing voice.” The EP appeared on several “Best of 2020” lists including Billboard, Rolling Stone and Sounds Like Nashville.

Rolling Stone describes “Why Things Happen” – which brings together three generations of Black country artists in Allen, Darius Rucker and Charley Pride – as “part polemic, part proclamation, and part prayer… opening up space for the artists to bear witness.”

Reflecting on Allen’s wide-ranging musical sensibilities, Music Row notes of the project: “While some artists still in the early sunrise of their careers, with a handful of hits to their credit, would be focused solely on extending their chart successes, it’s clear that Allen’s goals for his music are loftier than mere chart hits and No. 1 parties—he’s striving for music that testifies to his full spectrum of creative abilities.”

Allen, who has an incredible knack for connecting with people of all backgrounds and interests, enjoyed collaborating with other artists so much while making his monumentally successful predecessor that he didn't want to stop – so instead, in trademark Allen fashion, he kept going. The result: Bettie James Gold Edition. Released in June 2021, the 16-track album doubles down on Allen’s expansive love for music across genres, with nine brand-new collaborations with Babyface, Breland, Keith Urban, LANCO, Lathan Warlick, Lindsay Ell, Little Big Town, LOCASH, Monica, Neon Union, Pitbull, teamwork. and Vikina.

As Hits Daily Double notes, for Allen, “it’s about being grounded in the genre’s traditions and protecting the roots as much as it’s about creating a future for country music that’s more expansive and inclusive.”

“When it comes to music I love, I don’t really get wrapped up in boundaries or genres. After we finished Bettie James, I was like man, there’s so much music out there that I love, so many artists that I love, and I just wasn’t done making collaborations,” Allen says of the impetus for Bettie James Gold Edition; a sentiment that Billboard echoes, applauding that the album “broadens country’s borders.”

Beyond the music, Allen has also established Bettie James Fest in their honor. Consistently vocal about his deep reverence for his family, hometown and home state, the inaugural sold-out event took place on August 7, 2021 in Allen’s hometown of Milton, DE.

Allen is currently featured in The Country Music Hall of Fame® and Museum’s annual American Currents: State of the Music exhibit with his friend and fellow country artist Darius Rucker. The exhibit’s Unbroken Circle illustrates the connection between country music’s past and present by pairing artists with those who have influenced them or share musical perspectives. The exhibit runs through February 2022.

Much like his approach to music, Allen’s other creative pursuits know no boundaries. Allen’s debut picture book, My Voice Is a Trumpet, was published on July 13, 2021 with Flamingo Books, an imprint of Penguin Young Readers. Illustrated by veteran illustrator Cathy Ann Johnson, the book is a powerful story about speaking up for what you believe in, at any age. The book has received a starred review from School Library Journal, who hails that “the rhythm and flow of words perfectly match the art while advising readers to choose love and use their voices in a powerful song.”

“It’s very important to me that kids learn at a young age that they have a voice and that it is powerful. It is up to us as adults to teach them to use their voice to encourage and show love,” Allen says of his first-ever book. “Being a father of two kids, I try to encourage them to be themselves and love everyone around them. I’m hoping this book inspires at least one child and they always remember their voice is a trumpet.”

Allen also serves as Executive Music Producer for Netflix’s Titletown High, which premiered globally on August 27, 2021. His song “Big In A Small Town” is the theme song for the series, which follows a Georgia town where football rules, winning is paramount, and a champion high school team tackles rivalries, romance and real life as they work toward the ultimate goal: a state title. Full of high stakes sports action and relatable teenage drama, Titletown High delivers a complex portrait of the most unique football culture in America.