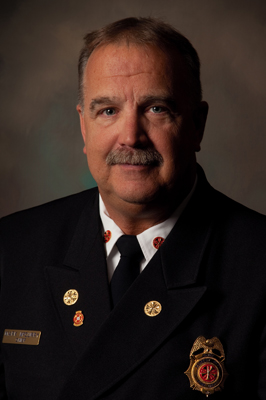 Mark McCurry was promoted to Fire Chief on January 5, 1985 after the retirement of Chief Robert G. Harrill. He served the fire department for 10 years prior to this date as a volunteer officer of the combination department. He comes from a family of firefighters with his grandfather and uncle serving as past chiefs in other fire departments. He has also served the state of North Carolina by serving as President of the Western Fire Fighter's Association and President of the North Carolina State Fireman's Association.

In 2009 was awarded the North Carolina Association of Fire Chief's award for, "Career Fire Chief of the year."

When becoming chief, his goals were to move the department into the future with a progressive approach on training, education, and prevention. Not just for the public, but for the department as well. "Fire departments have been one of the best kept secrets, our goal is to educate our council and the public as to what we do. The general public has very little knowledge of our jobs or extensive training and education," states Chief Mark McCurry.

In his tenure he changed his paid staff from police dispatchers to firefighters working a 24 on – 48 off shift, added additional personnel, built a new 1.5 million dollar station, and purchase new apparatus including a new Sutphen Tower and Engines.